Read the recipe all the way through, in advance 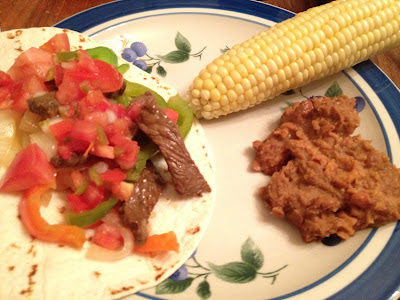 
For the second week in a row I cooked on Saturday instead of Sunday and a baseball game was again partly responsible. Every Memorial Day weekend the power is shut off at IBM Research -- Almaden, where I work so the Facilities folks can do maintenance. When the power comes back on I need to go to work and power up some servers so Researchers can resume their calculations. While power was planned to back at 5 PM Sunday, it is not unusual for it to be ready either earlier or later, depending on the progress of the maintenance work. We had tickets for the Giants game on Monday and I planned to go with Diane but Caryn was standing by in case I needed to work on Monday. To allow me the maximum flexibility to go into the lab on Sunday to complete the work, I decided to cook on Saturday. 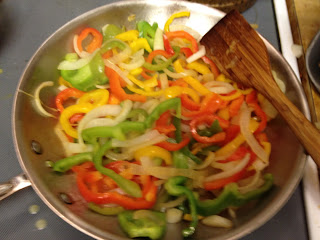 As we had some plans for Saturday, too, I wanted a fairly simple meal. Recently, Dr. Dan had published a simple recipe for Beef Steak Fajitas on his blog, 101 Cooking for Two. Not only could the fajitas be prepared without spending a lot of time in the kitchen, the recipe was easily adapted to provide food for vegetarian and omnivores alike. The filling  consisted of sirloin steak (I purchased a 1.2 pound "Top Sirloin Steak"), peppers and onions, plus condiments. I made the mistake of not carefully reading the recipe in advance so I missed the part about marinating the meat. The recipe calls for at least a 1-hour marinade but overnight is preferred. I ended up marinating the steak for only an hour due to my lack of planning. The marinade added good flavor to the steak and perhaps helped keep it tender. I had been concerned the fried steak would be tough but this turned out not to be the case as it was nice and tender. The recipe called for 1 onion, 1 green pepper, and 1 red pepper. Since Caryn would be having no meat with her fajitas, I added another pepper, choosing yellow for the color, and another onion. These were fried in some oil and were served alongside the tortillas, steak, and condiments.The fajitas were assembled at the table. For condiments we had tomato, avocado, sour cream, mango salsa, and tomato salsa. The salsas were fresh, purchased at the supermarket.

The side dishes all came from the supermarket: vegetarian refried beans and fresh (more or less) white corn, both of which were cooked in the microwave. I considered other options, making refried beans from scratch and grilling the corn, but in the end I used the time-saving microwave oven. I remember a time before every home kitchen had a microwave oven. There was a time when they were so rare that only a few restaurants had them. In my home town there was a restaurant called "The Electronic Kitchen" because it used microwave ovens. I never ate there and the building has been a Vet's office for many years. 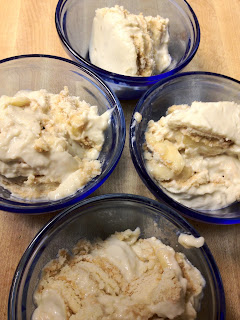 I made banana pudding on Saturday afternoon but, again because I hadn't read the recipe all the way through in advance, it wasn't ready to eat until Sunday. The recipe calls for 7 large bananas, 8 egg yolks, 6 cups of half-and-half, half a box of vanilla wafers, among other ingredients, and it is serves 12. Even after halving the recipe we ended up with a tremendous amount of pudding. The instructions also call for using a "3-quart trifle dish". Maybe you have a collection of trifle dishes, but we do not, so I used a 2-quart glass casserole. This may have affected the end result as this wider, shallower bowl led to me using more than half a box of vanilla wafers.  Like most puddings, this one is pretty easy to make as you combine most of the ingredients on the stove and heat until boiling, with constant stirring. The pudding is assembled in layers, alternating pudding with layers of sliced banana and the cookies. It then sits in the refrigerator for at least 8 hours so the wafers soften. While the pudding has a good banana flavor I doubt I'll be making it again. Even halved it makes way too much even for three of us. The softened cookies lead to a pudding that is less smooth, less creamy than most and you lose the crispness which is one of the appeals of these wafers.

The weekend plans worked out well. I went to work after Sunday supper and was there from 6 to 10 PM bringing up computers. With a little coaxing and a little patience they all came back up. Diane and I enjoyed a day in the sun watching the Giants play the Diamondbacks at AT&T Park. The USS Nimitz was anchored in the Bay beyond the right field wall, an appropriate reminder of what Memorial Day is all about.


Recipes
Beef Steak Fajitas from 101 Cooking For Two
Banana Pudding from Cook's Country
Some America's Test Kitchen recipes require registration before they can be viewed on-line. You may be able to find these recipes on other web sites.